On the way to autonomous manufacturing 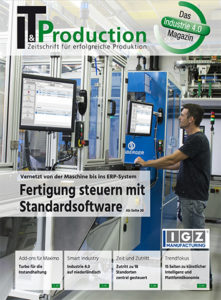 Equipping machines and plants with more and more sensors does not yet make a factory intelligent. The ‘nerve tracts’ need a digital ‘brain’ that knows the manufacturing logic and can interpret the meaning of the signals. Together they form the digital twin that enables the virtual commissioning of plants and their monitoring during operation. But what this Digital Twin is supposed to achieve must already be taken into account during plant planning.

Sensors alone do not make up the intelligence of a factory, says Clemens Launer, Managing Director of Indtact GmbH: “It is only created in interaction with electronics and software, which generate a virtual image of real events from the collected data”. For this reason, the system house, which specializes in sensor technology, is cooperating with ASCon Systems GmbH, which is developing a real-time shop floor control system for the construction of digital twins. The third company in the group is SG Engineering GmbH, which develops systems for automotive and special mechanical engineering and wants to convince its customers of the advantages of a Digital Twin. Representatives of the three companies explain how they want to help industrial users together. Companies in the automotive industry and other manufacturing sectors face the challenge of bringing their products to market faster, as ASCon Managing Director Mathias Stach says. “Above all, they have to accelerate the production start-up, otherwise they will be overtaken by newcomers who don’t have to worry about how they will amortize their expensive equipment. A second challenge is making production more flexible: converting a production line for two vehicle models to a third one requires enormous effort today because the IT behind it is highly proprietary and the control logic is hard programmed into the system. One of the problems with brownfield systems is also that the information is not sufficient for intelligent control. “They have no eyes or ears, so to speak, so we come here quickly to the sensor technology,” says Stach. “In a very short time, without feedback of the data from the shop floor, the planning status no longer correlates with what really happens in production. Only if, already in the planning phase, we succeed in establishing the link to the digital twin, we can adapt the planning models in ongoing operations. Today, there are technologies, not available to us five years ago, which now allow us to digitally map the mode of action of PLCs or controls”. 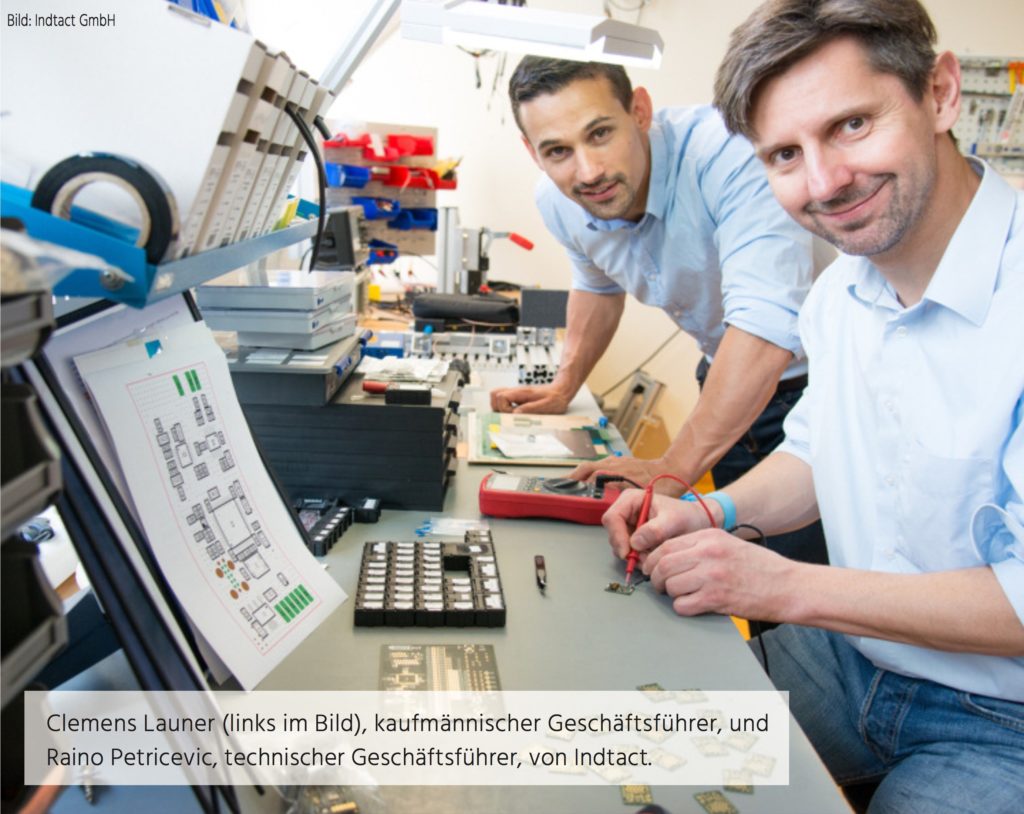 Avoid late changes to the system concept
The complete digitalization of the plants, including electrics, control software, PLC and so on, is an essential prerequisite for setting up a digital twin with which the functionality of a plant can be reliably simulated in the planning phase and adapted in later operation with less effort. Stefan Glanz, Managing Director of SG Engineering, explains that this is still a long way off in reality. Usually the mechanical design and simulation is commissioned first, but this is a purely kinematic simulation of the processes. Whether this can later be implemented and switched in terms of control technology is only known when the electrics and PLC come on board. “This means that we have to change the system concept again and again at 70 percent maturity,” says Glanz. “The Digital Twin would not only be an enormous relief for us, but would also save the operator a lot of time during commissioning. The difficulty faced by system planners today is that customers provide them with a lot of information too late for digitalizing the systems and that the planning process becomes incomplete, error-prone and inefficient due to many media or system breaks. The solutions available today for CAD and digital factory planning are not consistent enough, criticizes Stach: “We want to link the digital plant models with the digitalization of all signal streams and all plant data, including the controller and PLC, so that the planners at the customers, the system suppliers or the engineering service providers can access all data via a simple interface. The digital twin of the ASCon system provides planners with relevant data in a kind of library from which they can remove certain elements or function blocks and connect them with each other. The library contains not only modules for the equipment, but also for the sensors, actuators etc. with the corresponding control logic, as far as it influences the added value. It follows from this that changes to these building blocks are immediately effective in all plants in which they are installed. ” The challenge is to build the semantic network in such a way that all the data relevant to the functionality of a plant is mapped,” emphasizes Stach. This is the prerequisite for being able to simulate them under real conditions. 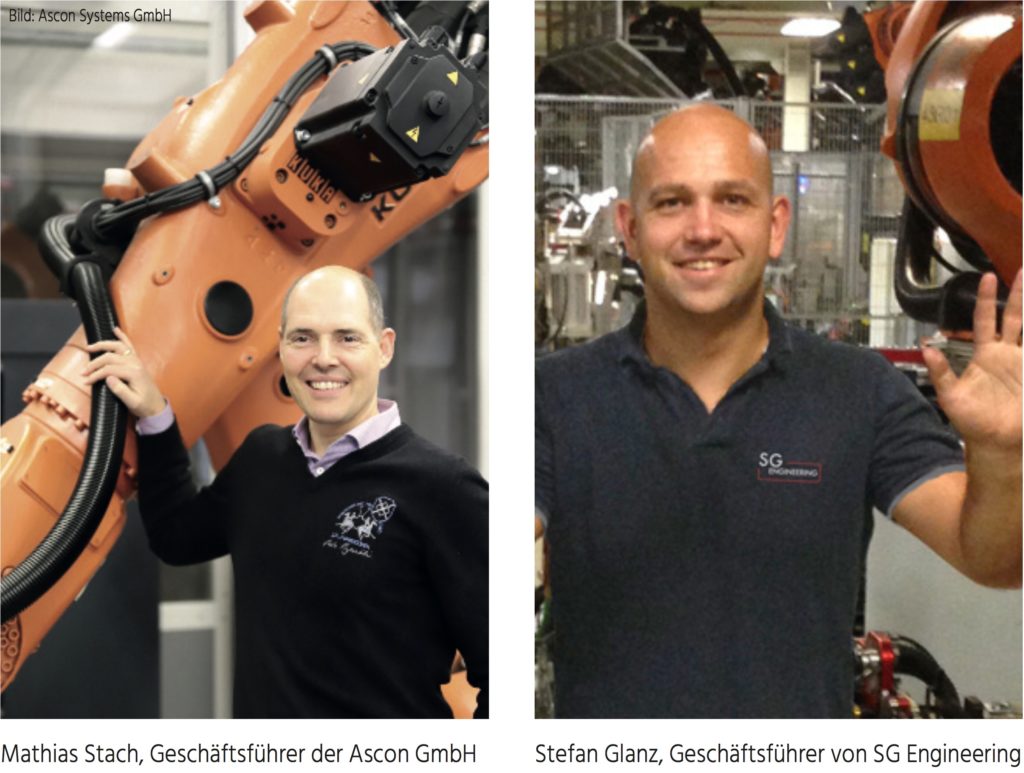 Simulation under real conditions
“Virtual commissioning of the systems is not a completely new idea, but it failed at the first attempt because offline programming on the PC never worked as expected,” says Glanz. The reason for this is that the mode of operation of the electronics could never be precisely simulated. They were always just approximations, as Stach says. “Only with the new generation of software for virtual commissioning is it possible to simulate the mode of operation down to the level of a fieldbus in real time. Real-time plays a very important role here. It allows hardware and software to be simulated under realistic conditions. This easily saves you two months in the start-up phase because you can avoid all the test runs and adjustments.” In practice today, it is the automation engineers who get the systems up and running and keep them running with a lot of manual effort. At the interfaces between the plant, control system, PLC and IT systems, they ensure that the plant does exactly what it is supposed to do. “The manual effort is so high because they enter relevant control information on a cell computer or even program it directly on the system,” explains Stach. “Our goal is to make this information more easily accessible by raising the programming level to a higher level and making the control software easier to configure. Virtual commissioning under real conditions is intended to ensure that a plant in China behaves like the model that was perhaps simulated somewhere in Stuttgart. Or almost exactly as Launer says, which is why it is so important to monitor it online with the help of sensors. “For example, if the Chinese use an oil with a different viscosity, the overall movement of the plant might slow down by a few milliseconds and start to run out of sync. With online monitoring, such things can be detected more quickly and taken into account when planning the next plant.”

Quality inspections with the sensor
SG Engineering expects the cooperation with Indtact and Ascon to generate new ideas for ‘intelligent’ systems. Glanz explains why this intelligence must be taken into account as early as the planning stage with an example: “A sensor system can be installed in a welding device, for example, which uses the evaluation of the acoustic signals to check whether all the welding points for the connection of the base assembly and side section are set correctly. Today, vehicles are ejected for this purpose in order to randomly check the weld spots. A sensor could eliminate the need for ejection and holding areas.” Launer explains how the inspection of the weld spots works in principle: “When a weld spot is set, a structure-borne sound is produced which is a mixture of the natural vibration of the material and process noise. The parameters derived from this, such as signal shape, level and frequency components, are to a certain extent a fingerprint of the process”. In order to check the quality of the weld spots in the running process, such ‘fingerprints’ are stored in the Digital Twin so that each weld spot can be checked for deviations in real time. The sensor systems from Indtact measure vibrations and loads in combination with structure-borne noise – for example through acoustic emissions – and thus record important quantities that allow conclusions to be drawn about the condition of machines or processes. They register, for example, when material begins to break, record the movement of an object and the load it has been subjected to, detect leaks in vacuum foils, measure the distribution of forces and detect the wear of a ball bearing before it breaks, so that a spare part can be requested in time. 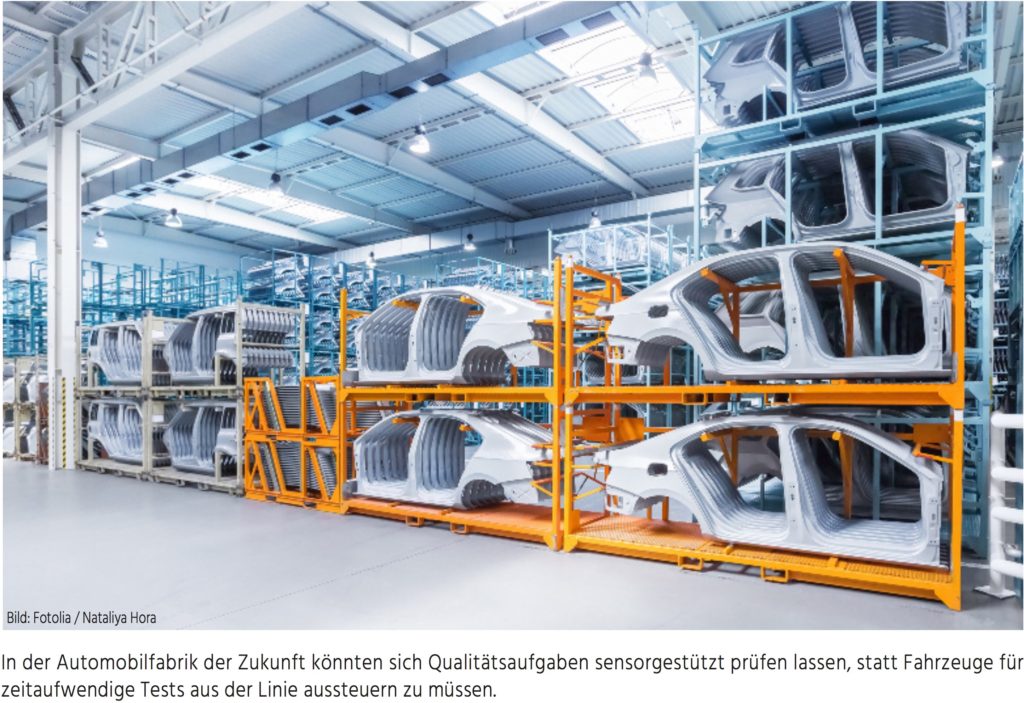 Sensor signals alone are not enough
“Our sensor systems are able to extract specific information from the signals, but only the combination with solutions such as that from ASCon Systems makes their effective use possible,” says Launer, who is no big friend of the term big data. The decisive factor is not so much the amount of data as its relevance. This is why software is needed that filters out irrelevant signals. Filtering is important, among other things, because data transmission on the shop floor reaches its limits. “While computers are now faster than the human brain when it comes to data processing, we are not yet ready for transmission,” explains Launer. “This is why we constantly have to ask ourselves how much data a system can pass on to the next node. The first meter from the sensor unit to the gateway and from there to the (cloud) servers is particularly critical. This is usually where the largest amounts of data accumulate.” The hype surrounding Industry 4.0 has led many companies to believe that it is sufficient to install sensors everywhere and then use artificial intelligence and big data analytics to turn the sensor data into something useful. After the first disillusionment, it has now become generally accepted that context and manufacturing logic have to be known in order to derive added value from the data. “Our software brings this context together with the functionality of the equipment. But we need close cooperation with plant planning and sensor technology in order to harness the added value for our customers,” says Stach, summarizing the goal of the cooperation between the three companies.

The author Michael Wendenburg is a freelance journalist in Seville.
www.indtact.de
www.sg-eng.de
Translated into German with DeepL Translator