Digital Twin is about to rollout by Airbus 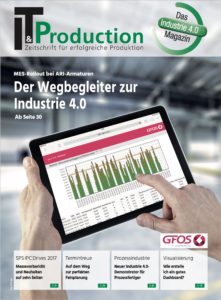 Production planning and control can be better synchronized by feeding the digital models of products and production lines with real-time data from the shopfloor. The Synced Factory Twin at Airbus demonstrates what this could look like in aircraft construction. But there is still a lot to be done before the real-time digital image of the factory can be used for aircraft assembly. (By Michael Wendenburg)

The digital transformation has to be planned well in advance at Airbus and other aircraft manufacturers. This has to do with the strict verification requirements in aircraft construction and with what Eckard Gatzmanga, Head of CAD/DMU Backbone/ICT Develop at Airbus Operations in Hamburg, calls the Brownfield: “The grown IT landscape, which varies from aircraft program to aircraft program, and which in principle must be maintained throughout the entire life cycle of the series. And that can be 70 years and more. It takes ten years to develop a new aircraft, which is then built for at least 30 years. A further 30 years pass before the last aircraft delivered ceases to be in service. The documents must be kept for this period. In addition, when certifying the airworthiness of an aircraft, EASA takes into account the IT systems with which the documents are created and managed. A system change would require recertification, which increases the cost of a new solution. The business case doesn’t pay off, says Gatzmanga, which is why the IT landscape can only be rebuilt at the start of a new programme. At Airbus, in addition, every national company, Natco for short, had its own IT infrastructure until the year 2000. The A350 is the first programme with a uniform PLM development across the group, which now serves as a starting point for the further development of the IT infrastructure with a view to topics such as Industry 4.0. The Centre for Applied Aviation Research (ZAL) in Hamburg is currently running 29 projects in which Airbus and its partners are researching new production methods and processes for future programmes. Their overriding goal is to reduce running costs and lead times through more automation. 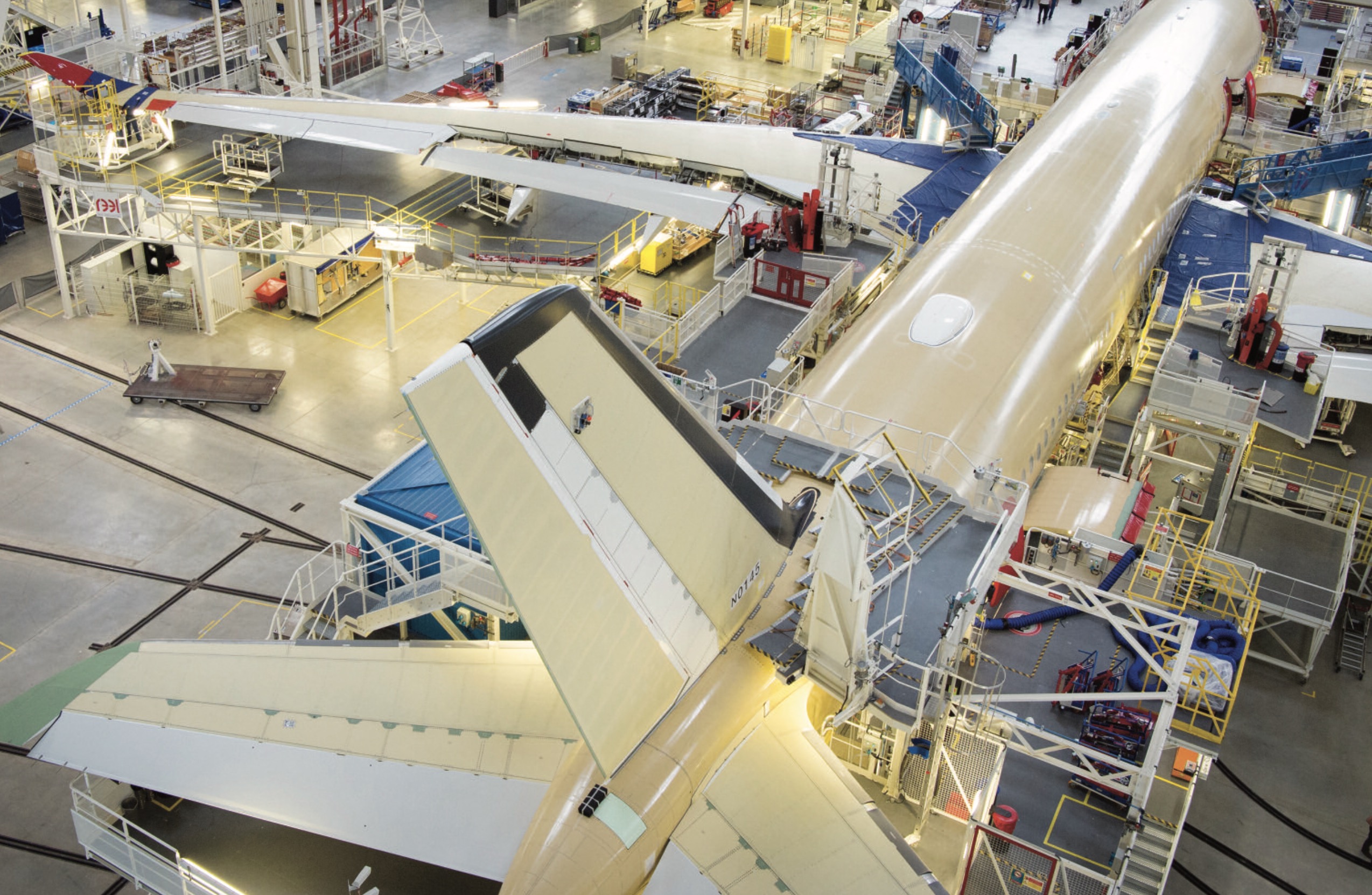 Overview in the shopfloor
Airbus has a problem that others can only dream of. With almost 6,900 orders, production is running at full capacity for the next ten years, and the backlog is currently growing faster than the number of deliveries. “We must therefore be able to deliver more aircraft in different variants,” explains Eckart Frankenberger, who as Head of Industrial Architecture & Manufacturing Strategy is responsible for optimizing manufacturing and assembly processes at the Airbus plants. A Digital Twin developed jointly by Airbus and the software manufacturer ASCon Systems in a Prostep ivip project is intended to make an important contribution by eliminating the separation between the real factory and its virtual image. The IT-based image is intended to provide more transparency on the shopfloor so that production managers can carry out dynamic line balancing in the event of deviations from the plan in the current cycle. Today at Airbus a relatively long time passes between the execution of a work order and its feedback, as Frankenberger goes on to explain. “This gives us no transparency about the actual process of an installation sequence with its highly complex part flows, which can take five or six days. If difficulties arise, we try to find solutions through governance on the shopfloor. The only problem is that our aircraft managers spend 80 percent of the time assessing the condition and identifying the problem, and have little time to solve it, let alone monitor the solution. Our key issue is to always know what’s going on on the shopfloor.” The Digital Twin from Ascon achieves this transparency by recording the progress of work in the factory via sensors and subsequently semantically processing it, without the employees having to report back the individual operations. This would be far too time-consuming and would not meet with much approval from the relatively autonomous teams, as they know exactly what they have to do. After all, Single Aisle aircraft such as the Airbus A319, A320 and A321 have been built in Hamburg for many years.

Mapping of the production logic
As Kilian Grefen, Managing Director of ASCon Systems GmbH, explains: “I can either look at whether the prerequisites for the value-adding activity are met, i.e. whether material and tools are moved to the workplace, or whether it has taken place because certain objects are removed again. Thirdly, I can record the added value directly, for example via the torque at the screwdriver.” It is crucial that not every process step has to be monitored in order to be able to make reliable statements about the structural condition of the aircraft. Certain work progresses can be indirectly determined by combining various sensor data. However, the acquisition of sensor data is not enough – it must be interpreted in the right context. Whether a certain material is available or not does not say much yet. Only when the system knows that exactly this material is a prerequisite for a certain work step can it draw conclusions, for example that the work steps have to be reorganized because a material is missing. For this reason, on the one hand, the logic of the assembly processes must be mapped in the solution as they were thought through in production planning, and on the other hand, this logic must be linked with the semantics of the sensor signals in order to evaluate their significance for the assembly processes. At first glance, this may seem quite complex, but it is not because certain situations at the workstations are recurring. “We can describe the logic of how certain resource or tool movements are interpreted in reusable blocks,” explains Grefen. The work progress is displayed on the 3D model of the aircraft or the fuselage section concerned, which has the advantage that it can be very easily visualized during meetings with the plant management. This does not necessarily mean that the complete assembly line has to be set up in 3D, which, however, Gatzmanga says, poses no problem since the production equipment is usually available as 3D models: “In principle, we want to map everything in 3D in the future in order to have a digital snapshot of the real factory at all times. Today, we create 3D models for production planning, but they are obsolete the moment the assembly line is switched on because something is constantly changing.” 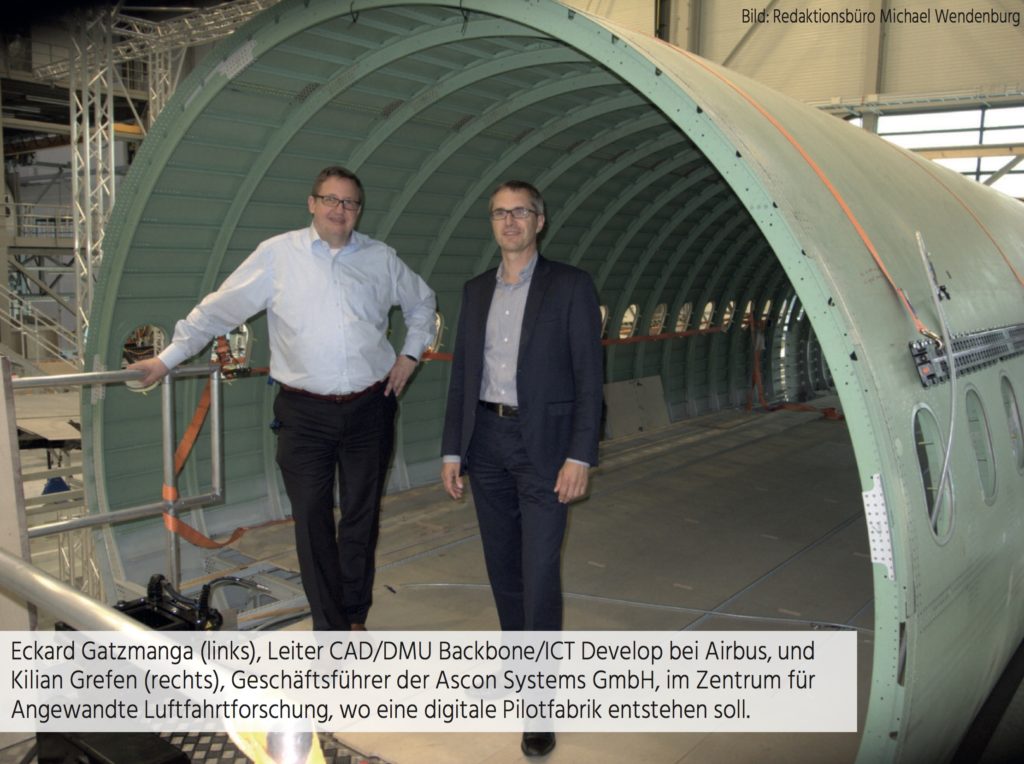 Real-time signal processing
“The Digital Twin built in the Synced Factory Twin project is characterized by the fact that sensor signals and logic can be processed almost in real time. The core of the system is the semantic engine developed by Ascon Systems,” says Mathias Stach, CEO of Ascon Systems. With highly scalable components based on Internet technology for parallel information processing, it is able to deliver the corresponding results in just a few milliseconds. “Basically, our Digital Twin can be used productively. We are currently demonstrating its industrial maturity in several pilot projects,” says Stach. The real-time capability is a major technical hurdle for the implementation of the Digital Twin in one of Airbus’ Final Assembly Lines (FAL), as the information has to be made available accordingly quickly. What was easy with a demonstrator, because the data could be loaded once, requires integration into the existing brownfield during operations. “So we have to access the information live from SAP ERP and other IT systems,” says Gatzmanga. The question is in which formats the data can be made available in real time. For example, the OPC UA protocol is not real-time capable. In addition, the bandwidths of industrial networks are not designed for the transmission of large amounts of data. It must therefore be clarified which data can be evaluated close to the machine in order to transmit only the critical values. “Security is also an important issue,” says Gatzmanga. “If I use data in real time, I have to be sure that it cannot be manipulated. Imagine that a torque wrench equipped with sensors is hacked and does not tighten a critical screw in the aircraft with the intended value, but reports back exactly this value. In the event of an error, I can hardly trace the cause.”

For the assembly of equipment
It is not yet clear when and where the Digital Twin will be used productively at Airbus. In any case, it is planned to equip the pilot factory in the ZAL, where the results of ongoing research projects will flow together. The solution can already be used at critical workstations in final assembly, where it promises quick benefits. Frankenberger sees great potential above all in equipment assembly, in which thousands of components are installed in the aircraft in a multitude of possible work sequences. The complexity in Major Component Assembly (MCA) is even greater than in FAL. In structural assembly, in which the large fuselage segments and wings are joined together, the work progress can be traced more easily because the parts are very large and can often only be assembled on a specific construction site. Here, however, it would be interesting to include the Extended Enterprise in the analysis and to check in advance by means of certain check gates whether the supplier components will be available on the shopfloor in good time. In the case of parts with an arrival time of several days, one could already track the loading and transport in order to estimate the arrival.

20 percent faster to your destination
“Today’s processes are extremely disrupted by missing deliveries or other problems that have actually been in evidence for some time,” says Frankenberger. The process from pre-assembly through structural and equipment assembly to final integration now takes between 32 and 33 days for an Airbus A321. A conservative estimate is that the automatic recording of the real situation on the shopfloor and dynamic line balancing could save around 20 percent of the time, as Frankenberger says. “The cost savings would be even higher, because today we have to do an enormous amount of manual work to determine the construction status of the aircraft. That’s why I’d rather see the Factory Twin in service today than tomorrow.”

The author Michael Wendenburg is a freelance journalist in Seville.

It is necessary to provide your name, a valid e-mail address and the request so that we know who the request comes from and can answer it. These details are therefore mandatory. Further information can be provided voluntarily. Data processing for the purpose of contacting us is carried out in accordance with Art. 6 Para. 1 Sentence 1 lit. a DSGVO on the basis of your voluntarily given consent. We would like to point out that the personal data collected for the use of the contact form will be automatically deleted after the completion of your request. I hereby agree that the data entered in the contact form may be stored electronically and processed and used for the purpose of contacting me. I am aware that I can revoke my consent at any time.