Digital Transformation in the Production Process 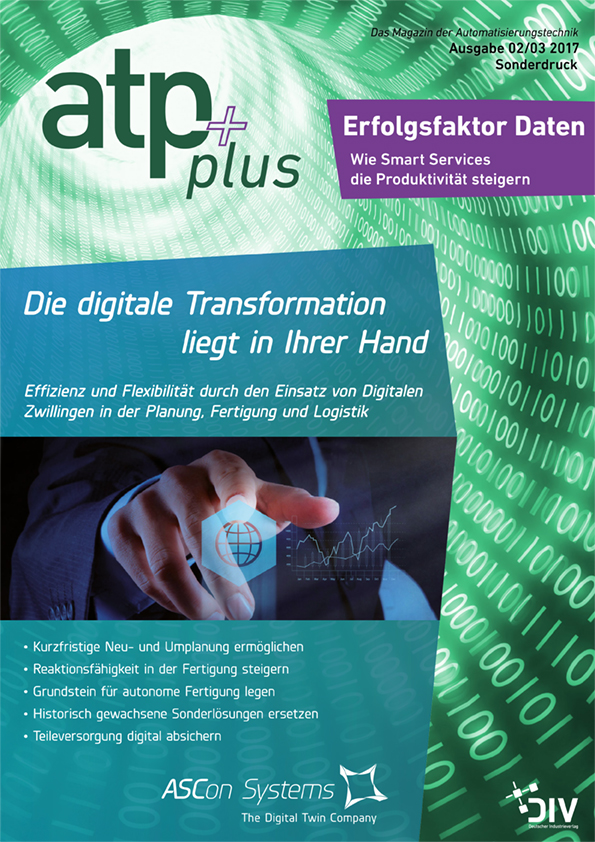 Shorter time-to-market, the pressure to be more environmentally friendly and growing individual customer demands are playing an increasingly important role in mechanical and plant engineering as well as in the manufacture of consumer goods. The digitization of production helps manufacturers and suppliers to master the growing complexity that these changes bring. In order to intelligently control the process and machining stages and ensure quality at a consistently high level, today’s complex configuration of the control and execution level must be dynamized, drastically reducing the effort required to change the range of services and the physical or logical configuration of a manufacturing system or its components. This is achieved with the digital twin of manufacturing. The benefits that can be achieved through this are: Increased availability, reduced set-up times, reduced costs and increased flexibility, responsiveness and speed.

1. From steam engine to Industry 4.0
The beginning of industrialization goes back to the beginning of the 18th century when the first machines were introduced into production and manufacturing. The 2nd Industrial Revolution began at the beginning of the 19th century. The discovery of electricity made it possible to suddenly produce in record time in the factory halls. The 3rd Industrial Revolution started in the 1970s with further leaps in development favoured by the use of electronics and information technology in the factories. This led to extensive automation of manufacturing processes, with machines now taking over work steps that could previously only be carried out manually. After the introduction of mainframe computers, the personal computers were increasingly used and made new ways of working possible. We are still in this third phase of the industrialization process today, but the manufacturing processes are now on the threshold of the next revolution, Industry 4.0.

2. Flexibility, efficiency and speed are the goal
The boundaries between the physical and the virtual world are blurred with the release of considerable potential for development, planning, production and logistics. The goal is a completely networked factory with all the possibilities of modular and autonomous production. In the end, production and logistics should control themselves and always keep production in an optimal flow. Qualified employees remain indispensable in the Industry 4.0 world and play a new, important and challenging role: they become controllers and thought leaders who define future processes and then use software to train the machines and optimize their behavior.

3. Data alone is not the solution
In relation to Industry 4.0, the discussion is mostly only about data (Big Data, Datalake, etc.). The digitalization of production is primarily about exploiting the potential of the business logic behind this data, i.e. about networking and interpreting it. This is the only way to make adaptable and flexible business processes possible. This means that business logic is no longer rigidly stored in the shop floor. Their interaction can be flexibly organized and controlled and all production-relevant data can be accessed in real time. This not only opens up new potential in production control, such as for short-cycle changes, but also in data reuse, such as for big data applications, analytics or cloud-based machine learning.

4. The Digital Twin shall ensure the link-up
A prerequisite for a fully networked factory is the digital twin of production, in which the business logic and production processes are in context. On the one hand, all relevant information must be available by networking all actuators, sensors, plants and systems involved in the manufacturing process. On the other hand, the data must be assigned to a context and interpreted there just as quickly as it arrives.

Digital twins are partial models that represent a specific view of segments of real production in the sense of model-based production engineering. The business logic, the production processes, the information processes and the data flows are coupled via a semantic model. New requirements for a production line are formulated directly. The digital twin then enables them to be adapted at short notice in order to be able to manufacture the new product. Smart services and data analytics methods, such as IBM Watson, can operate at a new level with these models. With this context knowledge, Big Data becomes Smart Data.

5. Digital Transformation in the Production Process
In order to increase the potential benefits of digitalization, a number of prerequisites must be created. This includes the recording of the physical manufacturing processes in a first, digital manufacturing image with all relevant systems, measuring systems, control modules and operating resources.

The digital data is then assigned to the business processes in the context of production. This step is the key to a further integrated value chain and leads to an understanding of how the manufacturing processes connect with other parts of the value chain, for example with technical development, suppliers and customers. This can be realized, for example, with the help of semantic networks that are structured in such a way that they can control the processing and localization of data in real time.

Another important prerequisite is the linking of the IT systems involved in an integration layer. The latest bus technology is used here to gradually dissolve the existing, historically grown point-to-point connections between IT systems. This integration layer forms the basis for real-time information processing.

6. Application example: “Always know what’s going on on the shop floor”.
In this application example, the Digital Twin provides the required transparency by recording the work progress on the shop floor via sensors and subsequently semantically processing it without the workers having to report back the individual work steps. The decisive factor in this application case is that not every process step has to be monitored in order to be able to make reliable statements about the structural condition of the product. Certain work progresses can be indirectly determined by combining different sensor data. The digital twin must be able to process sensor signals and logic in real time. The core is a semantic engine equipped with highly scalable components based on Internet technology for highly parallel information processing. It is able to deliver the corresponding results within a few milliseconds – and it can do so continuously. 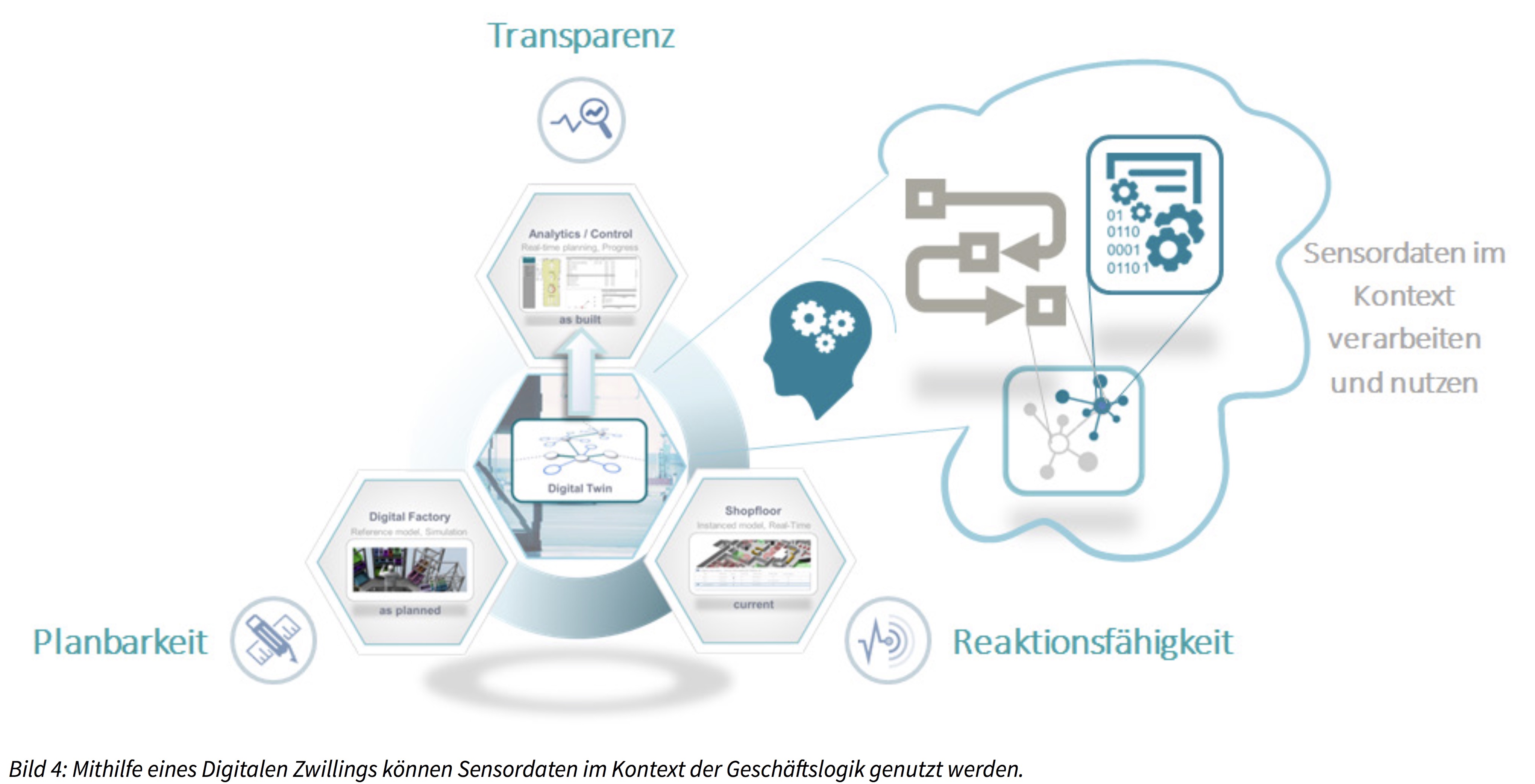 However, the recording of sensor data is not enough. They must also be interpreted in the right context. Whether a certain material is available or not is not meaningful as sole information. Only when the system knows that exactly this material is a prerequisite for a certain work step can it draw conclusions, e.g. that the work steps must be reorganized because this material is missing. Therefore, on the one hand, the logic of the assembly processes must be mapped in the solution, as it was conceived in production planning, on the other hand, this logic must be linked with the semantics of the sensor signals in order to be able to evaluate their significance for the assembly processes. At first glance, this may seem costly, but it is not, because certain situations at the workstations are recurring. The logic, e.g. how certain resource or tool movements are interpreted, can be described in reusable blocks.

7. The digital twin in use
In manufacturing, there is a multitude of concrete application possibilities for the digital twin. Some practical examples are given below:

7.1 Optimization of a single machine in production
Unlike conventional random samples or later statistical evaluations, the Digital Twin continuously supports quality assurance during production with individual machines and machine groups. With the manufacturing context in the form of the logical and functional machine image, the Digital Twin continuously records, stores and historicizes the combination of machine, product and process parameters and evaluates them. Deviations from the target values can be detected without delay, as well as quality problems that require immediate intervention.

7.2 Increasing efficiency at manual workstations
Here, the digital twin knows the construction order, the required parts, the work processes and the associated process parameters at all times. Wherever it is necessary, it can be used to easily document the construction status and carry out a parts assembly check. Via a touch display of the parts to be installed and the associated process steps, the operator can immediately start the rework process in the event of irreparable faults, e.g. damaged parts or faulty processes.

7.3 Optimization of rigidly interlinked assembly systems and flexibly interlinked production islands
Via a complete line image containing all relevant parameters, the Digital Twin represents the current state of the plant at any time. This data can be made available to any simulation system or algorithm together with the topological model and information on technical availability and upcoming maintenance measures. This means that production islands can either be clocked directly and recursively or the product can be optimally routed through the modular production island by constant simulation and optimization with regard to specified target criteria such as capacity utilization or run-through time.

In addition, the Digital Twin provides support in the event of necessary changes to a system, such as synchronisation or within the scope of CIP measures, in the event of shifts in material settings including triggering the necessary changes in the logistics chain and in the event of adjustments to the electronic work instructions. The Digital Twin can also provide assistance in ensuring the availability of parts at workstations via an electronic Kanban system that records which parts are consumed because they have been installed.

8. Digital Twin and Manufacturing Execution Systems (MES)
The special feature of the real-time Digital Twin is that the “raw”, almost unprocessed shop floor signals can be captured and thus a digital image of the behaviour and condition of the physical objects as well as the respective context can be created on the shop floor. This image can be used to analyze and anticipate the behavior of these physical objects. They can be monitored, controlled, diagnosed and predicted.

An MES, instead, is focused on the order and on the order progress and records pre-processed signals exclusively by PLC and cell computer in order to obtain an image of the production status. The preprocessing of the signals hides a considerable part of the object states from the MES, which can only react to “hard” facts, i.e. to explicit feedback.

Useful interfaces between MES and the planning world usually only exist in a proprietary context if the production planning system and MES come from a single source. The Digital Twin, on contrast, provides a quasi standard connection between the PLM world and the MES via an enterprise service bus and allows fine control of production and not just order control with status recording.

9. Summary
A digital twin, which can be used to plan, control and document in real time, uses full-context images of reality, i.e. images of material, energy and information flows in the planning, commissioning, operation and monitoring of production systems and plants, as well as in infrastructure management and logistics. This allows incoming signal streams, e.g. from production, to be received by any business object and stored in digital life cycle files. Such a digital twin has the ability to mirror analysis results and conclusions and can thus influence the system behavior of a plant or machine in real time.

The resulting virtualization of parts of the control hardware solves interface problems, supports standardization in production, and allows value creation to be controlled with all its consequences and possible access into the running process instead of just processing it, possibly supplemented by simulations preceding and following the process.

10. Core capabilities of a digital twin
• Real-time data integration based on an enterprise service bus
• Mapping of planning and production via semantic networking of shop floor data and business logic
• Complete mapping of logical networking across all production areas
• Data acquisition, process control and production control in real time
• Direct feedback of findings into the production process and into the quality control loops