Many companies are thinking about how they can use digital technologies to make their production processes more efficient in order to strengthen their competitiveness. At the heart of these considerations is the Digital Twin as the link between the digital planning world and the real world of production. The core requirement for a digital twin to support Industry 4.0 initiatives is the ability to process mass data from different sources in real time.

With an export ratio of 79 percent, the German engineering industry is particularly affected by the international trade disputes. The VDMA has lowered its production forecast for the current year from two to one percent due to the associated uncertainty among market participants. At the same time, cost pressure continues to increase as a result of globalization. The Chinese, in particular, are pushing their way onto the European market with increasingly high-quality products. German machine and plant manufacturers must therefore not only produce their products more cost-effectively, but also try to set themselves apart from the competition with new data-based value-added services and business models.

The positive news is that mechanical and plant engineering companies are obviously using the economic downturn to drive forward the digital change. According to a VDMA study, the proportion of companies that have defined a digitalization strategy for products, services and processes has risen from 21 to 40 percent in the last two years. Companies are not only making their machines Industry 4.0-capable, they are also developing new business models. Given this background, the growing interest in the use of digital twins is a matter of course.

In the context of Industry 4.0, the focus is essentially on the digital twin of production, whereby the boundaries to the product twin are fluid: From the manufacturer’s point of view, a machine is first and foremost a product that is perhaps to be supplemented by data-driven services. For the buyer, on the other hand, it is part of his production system, which he wants to monitor and control more efficiently. Machine and plant manufacturers should therefore always look at the subject of Digital Twin from two perspectives: as a potential user and as a provider of digital twins and value-added services based on them for their customers’ production processes. Experts such as Karl-Heinz Streibich, President of the German Academy of Engineering Sciences (acatech), predict that in three to five years, no one will buy machines that do not have a digital twin.

The term “digital twin” is increasingly used in an inflationary manner for every simulation model of a physical object, as Mathias Stach, Managing Director of the Digital Twin Company ASCon Systems, says: “For us, the digital twin is only a true twin if it virtually maps both the digital planning process and the real production or logistics process with all the systems, tools, conveyor technology, actuators and sensors involved. Above all, however, he must know the semantic context, i.e. the behaviour of the system and the interdependencies of the components. Otherwise, we can at best simulate, but not control, if, for example, quality or process parameters get out of hand”.

Without knowledge of the semantic context, neither the product nor the production twin can take over control tasks because they do not know how to interpret the sensor signals. This context is not automatically derived from the sensor data, however large the data volumes and however intelligent the algorithms of the data analysis may be. The context model determines what the plant in question is actually supposed to do and thus bridges the gap to the digital planning world that normally takes place in the PLM environment. There is always an intersection in the world of product data, as Stach explains, because the parts list information of the product to be manufactured must necessarily be integrated into the digital twin.

The Digital Twin of a production line must be able to continuously compare the planning and actual status. It must be able to recognize that manufacturing and logistics processes are running within the defined quality parameters and that the component currently being manufactured or assembled on the line is also in order. This is only possible if the data is evaluated (approximately) in real time in order to intervene as immediately as possible and eliminate errors as soon as possible in the running cycle or to reject the product immediately. 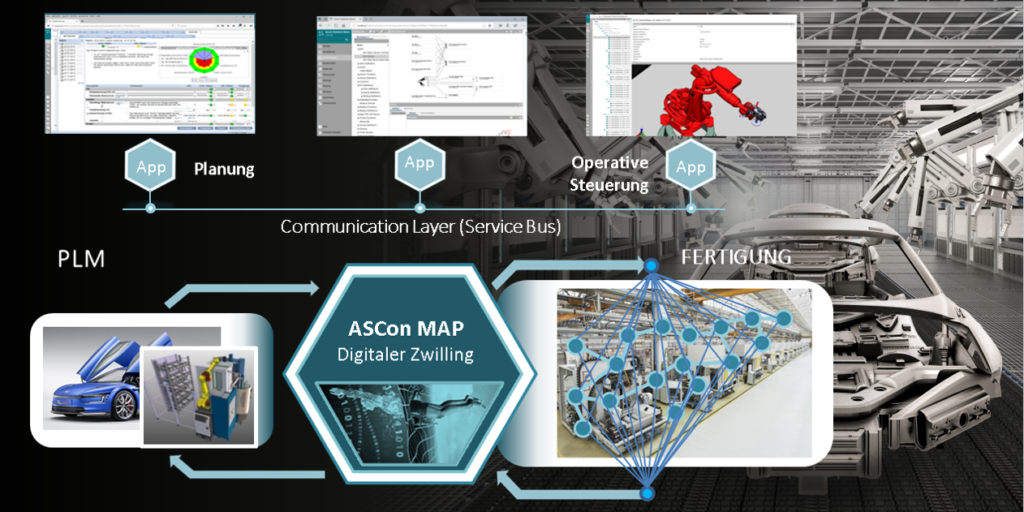 The development of sensor technology, the availability of large amounts of data and progress in the field of data analysis using Artificial Intelligence (AI) and Machine Learning (ML) have undoubtedly made the Digital Twin socially acceptable. However, this does not mean that it can only be used for modern machines and systems that are equipped with sensors. The brown field of existing plants and production lines can also be retrofitted with sensors and enriched with digital context in order to control production processes more efficiently.

In this context, efficiency means above all flexibility. The trend in the manufacturing industry is towards greater individualization of products, which are necessarily manufactured in smaller batch sizes, and if possible at the cost of a mass-produced product. “More and more companies are starting to think about modular production,” says Stach. “By then, at the latest, they will need a continuous digitalization of their manufacturing and logistics processes via the digital twin.”

In addition, it is becoming increasingly difficult for companies to predict which products the customer will order tomorrow when setting up a new production line. How many more diesel vehicles will OEMs produce next year, and how many electric or hybrid vehicles will they be able to sell? Or maybe the fuel cell will come after all? Production planners and automation engineers must be able to react much more flexibly to such imponderables and adapt their production lines more quickly.

An essential prerequisite for this is the possibility of virtualizing the control software of the systems, i.e. replacing hard-coded PLC controls with a flexible software integration layer in the digital twin. The PLC hardware only controls the basic machine functions, while the actual construction program is defined on the virtual control level, as Stach says: “This has the advantage that changes to the construction sequences, switching operations, etc. can be made in a matter of seconds during running operation”. This enables automation engineers to react more quickly to changes in existing production processes and put new plants into virtual operation, which accelerates their production start-up. The virtualization of the controller also saves costs because less PLC hardware is required.

Ensuring quality during the process

In addition to control, the monitoring of production processes is an essential task of the digital twin. Thanks to its real-time capability, deviations in product quality can be detected and corrected immediately during running processes, even during clocked production, thus avoiding time-consuming reworking. Process-accompanying quality assurance guarantees zero-defect production, which saves time and money. By monitoring not only the product but also the production process, the Digital Twin provides valuable information for ensuring maximum availability of the systems, e.g. through new service offerings such as predictive maintenance. 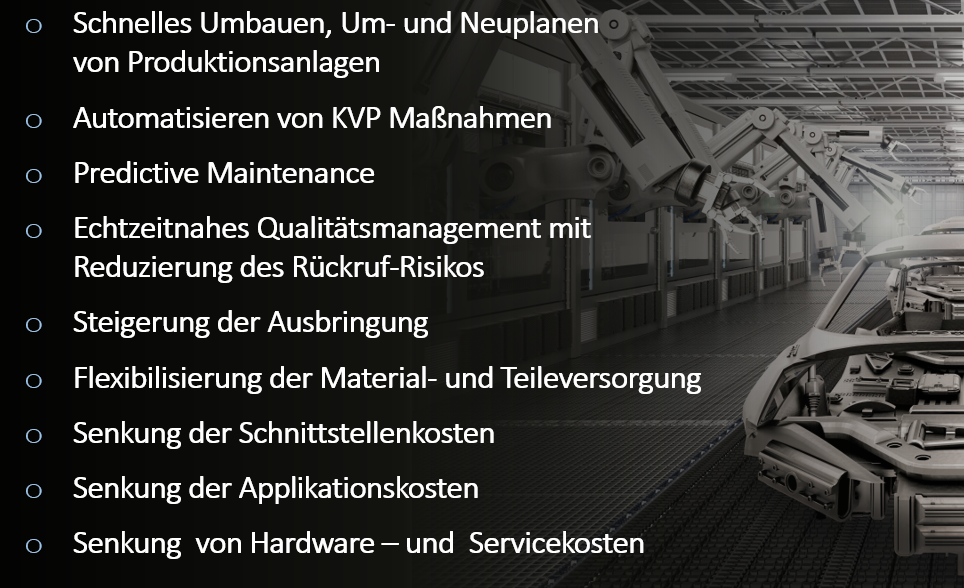 Figure 2: The main benefits of digitalization

In connection with the Digital Twin, the possibility to evaluate the generated data sets with the help of algorithms of the AI and the ML is becoming increasingly important in order to make suggestions for process improvements. In automotive manufacturing in particular, more and more sub-sections are fully automated, so that a large number of process parameters that can influence quality have to be monitored. It is no longer just a matter of determining deviations from the defined target state, but also of identifying the possible causes of these deviations, which is becoming increasingly difficult for employees due to the complex interrelationships. Here, self-learning systems can help to analyse dependencies and permanently optimise the condition of the plant. “But this is already the next level, the Digital Twin 2.0,” says Stach.

However, the tools for data analysis are already part of ASCon Systems’ Digital Twin platform. At the heart of the solution are a real-time system core and a semantic engine that allows the relationships between the sensor data and the respective manufacturing context to be mapped in a semantic model and interpreted in real time. Planning and production data from heterogeneous data sources can be networked with each other via a real-time data bus. The solution is able to process mass data and store all signals and information about status changes with their history in a lifecycle file. 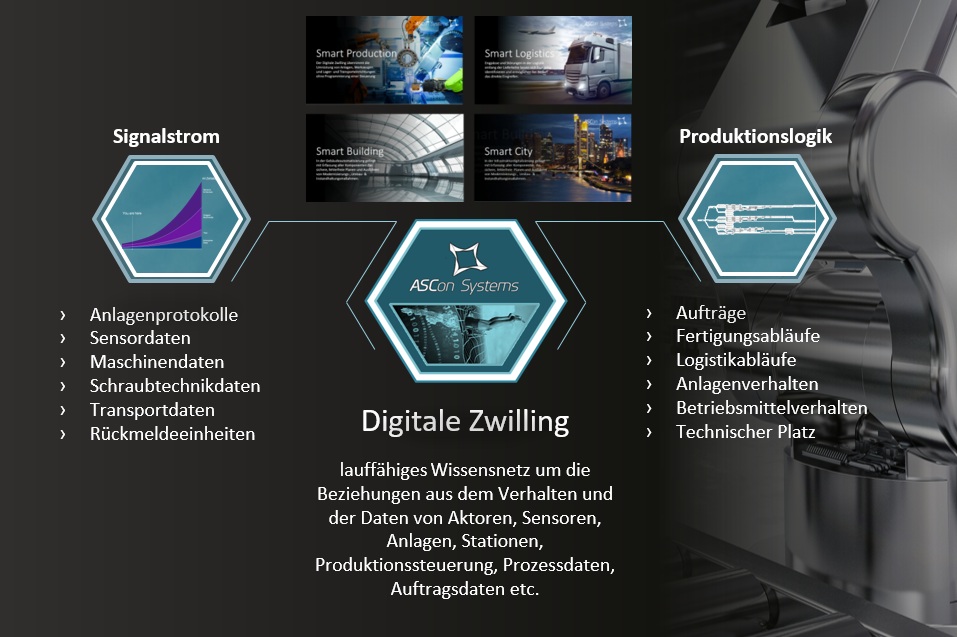 With the help of the ASCon Digital Twin, all conceivable applications and application scenarios in development, production and service can be mapped. ASCon itself is currently concentrating primarily on the digital twin for production, i.e. the level of production planning and manufacturing, conveyor technology and logistics, as Stach emphasizes. “This is our world.” But he does not want to rule out the possibility that customers will also be supported in the future in the development of digital product twins.